Jack Cayman is the main protagonist, anti-hero and player character in the videogame MadWorld.

A mechanic, bounty hunter, former marine and ex-cop with his primary weapon as a retractable chainsaw equipped to his right arm. Jack is the protagonist and player character of MadWorld, and is voiced by Steven Blum. His other known history is that it was erased prior to DeathWatch's 2019 opening and that no specifics are given beyond nothing is certain and is definitely not as seen in the game or cut scenes.

Jack is the star of MadWorld, the man with the chainsaw on his arm, the cigarette in his mouth, and the biggest swagger to hit Jefferson Island in years. Jack arrives on the scene in Varrigan City without a sponsor, a reputation, and with no obvious reason for being there, aside from the hundred-million-dollar prize that’s up for grabs.

Of course, that’s what he wants them to think. The people in the studio, the folks watching at home, even Agent XIII…none of them know about the voice in his ear, Amala. Nor does she know about the voices in his head. Jack’s mysterious past and his motivation for entering the DeathWatch Games is revealed in due time—but only to those who live to hear the tale. He has only one ambition in life and that is to kill people. He doesn't give a damn who it is either.

"I don't help people. I kill them." (said at certain points through the game; something of a catchphrase for Jack).

"Jack... just Jack" (when introducing himself to XIII) .

"Let the games begin." (At the end of the cutscene before the tutorial) .

"So... this is the strip. Think I have enough time for a lap-dance?"

"Who wants a piece of the champ!?"

"You're a fucking joke!" (when taunting enemies in gameplay).

Concept Jack and his Concept Motorcycle

A Poster featuring a different concept for Jack, note the scars and spiky hair. 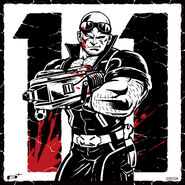 Official art of Jack Cayman for the 11th Anniversary of MadWorld.
Add a photo to this gallery

Retrieved from "https://madworld.fandom.com/wiki/Jack_Cayman?oldid=7833"
Community content is available under CC-BY-SA unless otherwise noted.